Bolt Buns are anchor bolt protection and safety devices for use in new construction and industrial facility applications. The Bolt Bun’s patented design surrounds and protects anchor bolt projections against damage from trucks and other equipment working on site. It also helps protect workers from a dangerous trip and impalement hazard. Bolt Buns are primarily intended for the temporary protection of anchor rods until steel columns can be installed, but can also be utilized as a permanent safety solution.

Highly visible and durable, Bolt Buns are made in the USA from UV-resistant HDPE. Bolt Buns are reusable and recyclable. The Bolt Bun’s shape allows wheels and tracks to roll over it, protecting the anchor rod within from bending or breaking.

Anchor bolt projections typically sit exposed two to eight weeks while waiting for structural steel to be delivered to the site. During that time, almost half of all new construction projects can expect to suffer at least one damaged anchor bolt. OSHA regulations require that damaged and broken anchor bolts can only be repaired, replaced or field-modified with the review and approval of the project’s structural engineer of record. Sometimes the fix is relatively easy, like installing new epoxy anchors and drilling new holes in base plates. At other times circumstances require much more involved repairs, like jackhammering concrete and re-pouring foundations. Whatever the fix, it will typically mean lost days and added cost.

Beyond the construction costs of repairing or replacing damaged anchor bolts, protruding anchor rods can also present serious hazards to workers on construction sites or within industrial facilities. OSHA regulation 1926.701(b) requires that workers shall be adequately protected from the impalement hazard of projected rebar, usually by use of flat-top caps. There is not, however, an OSHA regulation specifically requiring protection from projected anchor bolts, even though the impalement hazard is similar in nature. In their official response to inquiries seeking clarification on this matter, OSHA has stated that while regulation 1926.701(b) does not specifically apply to anchor bolt projections, the General Duty Clause, which requires employers to provide a workplace that is free of recognized hazards, still applies.

The Bolt Bun 90 is a specially shaped version that protects the entire group. Bolt Bun 90’s can be installed on rods spaced as close as 4-inches apart. 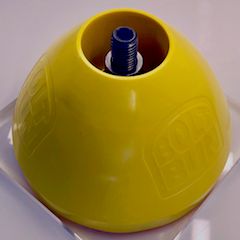